Looking Farther Down the Road

The stock market has continued to do very well over the summer months, reaching new, all-time highs and proving to even the most stubborn of skeptics that Great Recessions can become Great Recoveries for those with the appropriate time horizon. While our industry spends a great deal of time and effort focused on relative performance results compared to appropriate benchmarks, the greatest value any financial advisor or money manager can provide is usually addressed far less often; simply keeping you in the game.  (View a printable version of this Economic Update: Looking Farther Down the Road)

With the stock market at new all-time highs, we thought we’d depart from the typical past and focus on the reasons investors can and should remain long term bulls even as we enter uncharted territory for the S&P 500. The chart below shows the path of the S&P 500 over the last sixty years and the shaded areas represent periods in which the economy was in a recession. One unique aspect of this particular chart is that it is logarithmic in nature, which is a fancy way of saying it paints a better picture of the market’s percentage change over time than its absolute change over time. 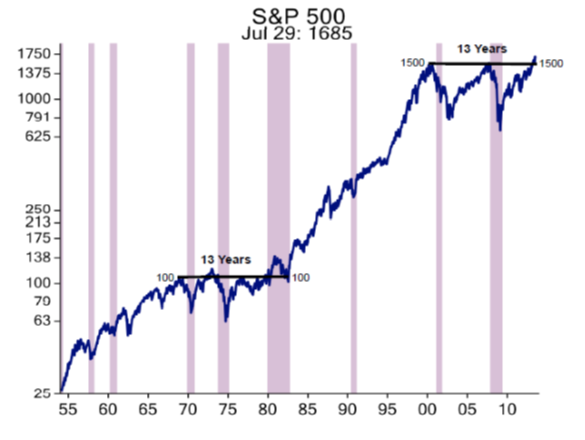 In looking at this chart a few key observations emerge. First of all, recessions happen and when they do, the stock market almost always does poorly. Fortunately, you can also tell that the economy spends more time out of recessions than in them and during these periods, the stock market typically does very well. Over the entire sixty year period, the stock market has increased an astonishing seventy fold!

There also, however, are two intermediate, thirteen year periods of time in which the stock market essentially made no gains but was very volatile, remaining flat from 1969 to 1982 and also from 2000 to 2013. If you had had the entirely bad luck of investing all of your money in the stock market just prior to 1969, it would have taken thirteen long and volatile years before you finally recouped your principal investment. Like my younger brother Andy who has only known the stock market since the piercing of the tech bubble in 2001, you’d be very skeptical about the value of investing in stocks.

Other than the fact that both of these periods lasted thirteen years, do they share anything else in common? From an economic perspective, both periods endured recessions, with very violent stock market corrections along the way. During the 70’s and early 80’s, inflation and interest rates were very high; commodities did very well while stocks languished. (Figure 2) While I was too young to remember, long waits for gasoline were the norm and the prime interest rate surged to nearly 20%, which is hard to even fathom. (Figure 3) 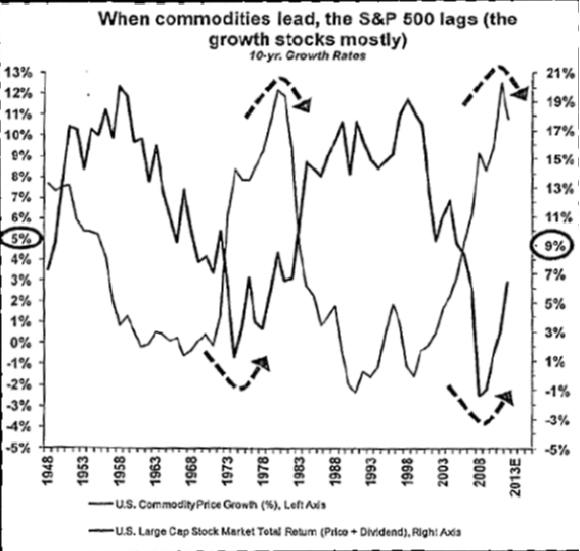 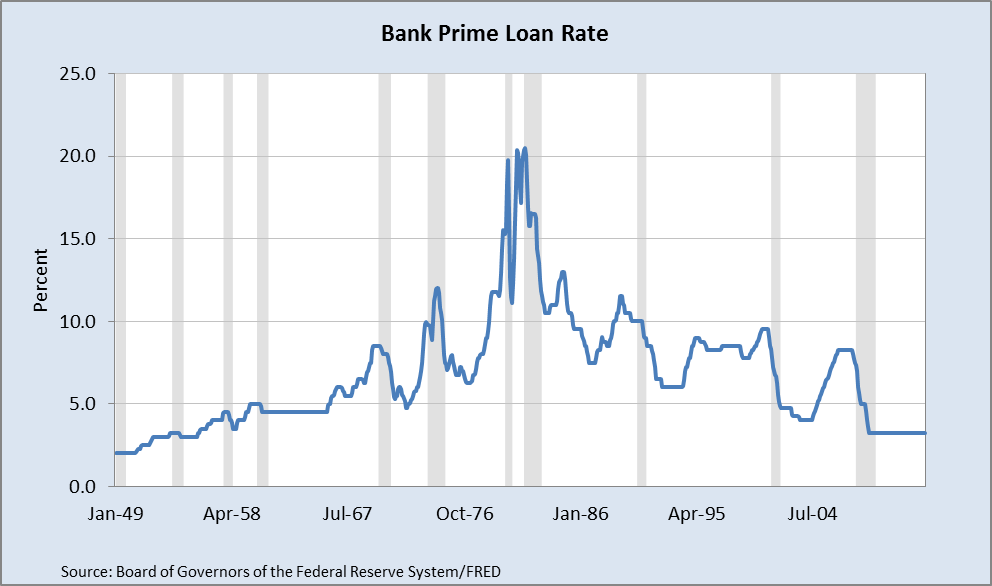 Even though inflation and interest rates have not been problems, commodities have similarly outperformed stocks since the popping of the internet bubble in the year 2000. Rather than inflation driving commodity trends, we suspect the industrialization of China has played the major role, providing a consistent bid to everything from oil to cotton.

While other factors may be at work, the inverse relationship between commodity and stock prices appears to persist for similar stretches of time going back more than 150 years. (Figure 4) One potential theory for the pattern could be the useful life of industrial infrastructure. After every thirty or so years, perhaps new technology reaches the point where scrapping old investments becomes a wise decision. What were the factors that may have contributed to the end of the commodity bull run in 1982 and the beginning of an eighteen year bull market for stocks? Republicans will eagerly point to the rise of Reaganomics and a hawkish Fed as catalysts for the shift in performance dynamics. Since we all pay taxes and marginal tax rates were falling at the time, funds that would have otherwise gone to the government or to lawyers and accountants for the purpose of sheltering income were instead freed up to invest in more productive private sector endeavors, including the dawning of the personal computer.

While Democrats might wince at the idea that Reagan’s policies were a driving force behind the shift, it is worth pointing out that Democratic President John F. Kennedy was a pioneer in promoting tax cuts as a means of stimulating a more productive economy. Republicans and Democrats would agree that the rise of the personal computer industry likely ushered in a massive wave of productivity for the economy, one which not only created new jobs and destroyed other ones, but kept inflation at bay and improved overall living standards for everyone.

Today the stock market sits at levels not seen since the eve of the 2000 internet bubble and the 2007 housing fiasco. An investor in 2000 has recovered her principal but enjoyed no real gains for the past thirteen years. If the inverse relationship in the pattern of commodity and stock market performance is real and one whose trend tends to persist for fifteen to twenty year periods, what are the factors that could usher in a similar shift today and a strong period for stocks relative to commodities?

We think it is safe to say that even the most fervent of Democrats wouldn’t point to the rise of Obamanomics as a reason to be bullish about the economy or the stock market in the years ahead. Many Fox channel watching Republicans believe Obamanomics, quite frankly, is the beginning of the end. Only time will tell, but as it relates to the commodity side of the equation, China has been a price setter as it has undergone fevered industrialization for the last fifteen to twenty years. While it is a delicate balance to be sure, we believe the buildup of China is nearing its end; while there will be more development, it won’t be nearly at the rate of the recent past and in the short run, severe troubles may lie ahead.

While we know tax rates have gone up and that the government will be running a larger portion of the economy in health care, we don’t know exactly where we are on the Laffer tax curve. If anything, Figure 5 shows government tax receipts have been increasing in recent months, suggesting not only that the economy has improved but that higher marginal rates aren’t yet causing a decline in overall tax revenues. 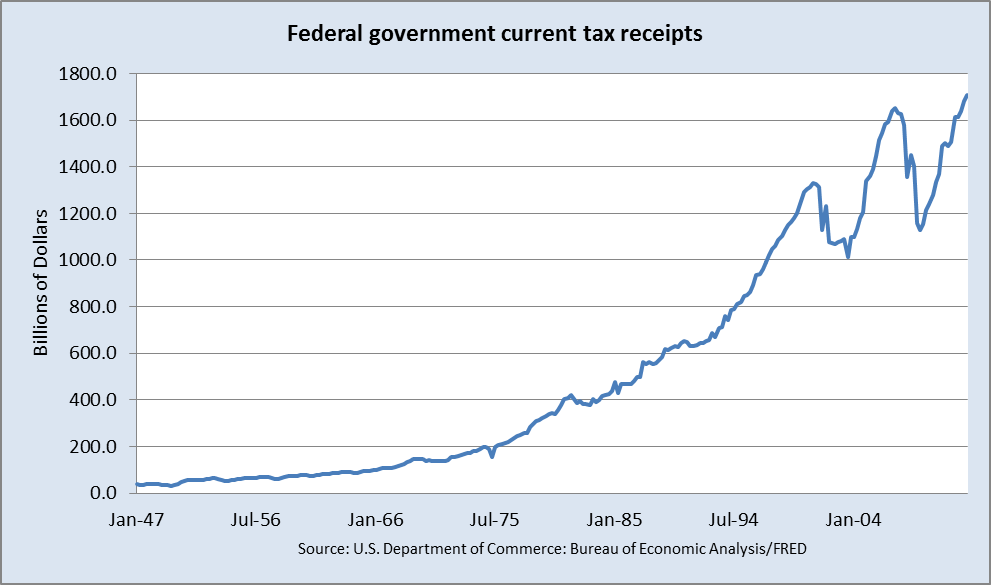 While they aren’t entirely the same, energy costs, like taxes, are expenses we all must pay. While some radicals will avoid the use of energy entirely just as some have done strange things to avoid taxes entirely, it is safe to assume that dynamics in the energy industry have changed. Our country has gone from energy dependence towards independence at a rate that would be shocking to those who lived through the Presidential campaign six years ago.

Mike and I have researched many ways to play the domestic energy renaissance theme, but have come to the conclusion that the greatest beneficiary may not be from within the energy sector itself, but for the market at large. Similar to the impact that falling tax and interest rates had on the economy during the 1980 and 90’s bull market, falling energy costs could lead to similar improvements in the economy over the next ten to twenty years. Not only is production improving domestically faster than anyone could have guessed, but it is doing so with fewer rig counts, suggesting exponential benefits to the economy over the long run. (Figure 6)

If nothing else, new sources of energy should restrain inflationary pressures across the commodity complex while the relentless productivity benefits of the web continue to shift the economics of entire industries as we have known them. No one could have envisioned the impact the iPhone has had on the economy in the last five years and while we don’t exactly know what is coming next, it will come. Driverless cars seem extremely far-fetched, but so was the idea of U.S. energy independence just a few years ago. Personalized medicine could enable biotechnology and pharmaceutical firms to tackle diseases with smaller patient populations more profitably, just as new drilling techniques are opening up new sources of energy. A new wave of asset efficiency could be and likely will be at hand, including the labor market where LinkedIn is making major strides.

Many financial studies have suggested that women are better long term investors than men when it comes to their money. Typically, these studies hypothesize that since men have higher testosterone levels, they tend to be greater risk takers, sometimes irrationally so. While I suspect that could have something to do with it, I also know that women are generally better at discussing their problems and concerns with others without having an overwhelming urge to “fix” things, as men so often do. (click the link for a very funny video!)

While some nurturing and tweaking along the way is important, I frequently remember the advice of a former boss who reminded me on many occasions “not to confuse motion with progress.” Many still don’t believe in the stock market and have given up on it entirely out of political disgust. While it is one thing to feel a certain way, it is quite another to go all in and put your feelings into action.

To wrap things up, we understand that this update has been a bit different than most. We didn’t focus on the past quarter’s results, who will be the next Fed chairman, or when tapering will likely begin. We didn’t focus on improvements in the favorable national and regional PMI surveys, the recent employment statistics, the record fund flows to equities, or the backup in interest rates. Knowing that we are at all-time highs in the market, perhaps we thought looking farther down the road was a more worthwhile exercise.

Periods of slow but stable growth and low inflation have typically been among the very best environments for the stock market, which is why some have called it a Goldilocks economy – neither too hot nor too cold, but just right. Given a potentially game changing trend in commodity prices caused by new sources of more productive supplies, tapering demand trends from emerging market economies and viable substitutes, we believe we could be on the verge of a brand new bull market for financial assets, which could last for longer than most expect, even with an occasional recession along the way.

In an era of structurally low interest rates brought about by short term Fed policy decisions and many disinflationary trends across a whole swath of industries brought about by innovation and new competition, Jason Trennert, investment strategist at Strategas Research Partners, likes to point out that equities are the place to be, simply because of the T.I.N.A. factor – There Is No Alternative.