I am not a particularly good salesman.  From the time I first meet a prospect to when they become a full-fledged client, it can often take two years even when they initiate the first meeting.  Fortunately, growing the firm isn’t one of my primary roles, a responsibility that does fall to Bill Hoover, my business partner.  The beauty of our relationship is that while Bill devotes his time to our firm’s “outside” efforts, I am able to spend almost all of my attention tending to the portfolios of those who have already hired us.  (View a printable version of this Economic Update: Twenty Five)

As an entrepreneur, I also recognize that if you don’t have customers you won’t be in business very long and, in that vein everyone is in sales.  In addition to having a longer than average sales cycle, I have also come to realize that client growth in the investment management industry, at least ours, tends to come in clumps.  Why that is the case, I’m not sure, but it definitely has been the case for us.

In the past week, I’ve received far more inbound prospect calls than is typically normal.  While it could always be a coincidence, after talking to this week’s crop, I recognize it likely isn’t.  Most express a concern that their current advisor may not be doing a good job for them and have come to me seeking perhaps, an affirmation of those feelings.  While it would be easy to say yes, it isn’t always that simple.  What problem do these prospects share?

The stock market is up 25% this year.  The common theme for those who have called this week is that their advisor may not be doing enough to manage their assets.  In other words, their portfolio may be up, but not nearly the 25% that they keep hearing amidst media reports and the hot Twitter IPO.  Rather than throwing their advisor under the bus and telling them how we would do so much better, I probe for the answers to a few more questions.  The reality is that their portfolios were never designed to be up 25%.  Coming off the 2001 and 2008 bear markets, most have been living off their portfolio income with strict instructions to their advisors to invest conservatively.

Now that the market is up 25%, they are worrying less about losing principal and more about not growing it.  Greed is seeping into the dialog like a silent assassin.  Reports of 25% coupled with unscrupulous radio and television ads leave them with the idea that they can enjoy 25% equity like returns with none of the risk they experienced in 2001 and 2008.  Once again, investors are being lulled into the notion that alchemy just might exist.  While some adjustments can make sense for many people, I never want to promise something I can’t deliver.  Having it both ways is one of those things.

But it’s not just the little guy obsessed with the number 25.  Several state pension funds are getting questions and facing political pressure about why they are paying exorbitant fees for alternative asset classes that aren’t keeping up.  Like the retail investor who has hired one strategy but now expects a different type of return, institutional investors forget that most hedge funds weren’t designed to capture all of the upside in a strong equity market.  With a short component betting that the market will decline, most will lag in up markets but outperform in downtimes, or at least that is the idea.  While we can always debate whether or not a hedge fund is a new asset class or simply a new fee structure, it doesn’t make sense to hold them accountable to market returns when they do not necessarily take full market risk.

Even some hedge funds are questioning the idea of being short in the face of the number 25; this week’s Wall Street Journal highlighted a few high profile hedge funds who were launching long only products.  The fact that these new long-only funds come packaged with hedge fund like fees suggests that the answer to Buffet’s famous question – whether hedge funds are really new asset classes or new fee structures – may not be that far away.  So, whether you are an institutional or a retail investor, the first answer to any question about your portfolio’s performance should be accompanied by a discussion of what you were trying to accomplish in the first place.

Having said this, we’re not naïve.  Most investors want to know where we think the markets are going and if in the face of 25% YTD gains and a 3 fold rebound off the 2009 lows, it might now be too late to join the party.  The stock market has not only recovered, it has passed both the 2001 and 2007 highs. 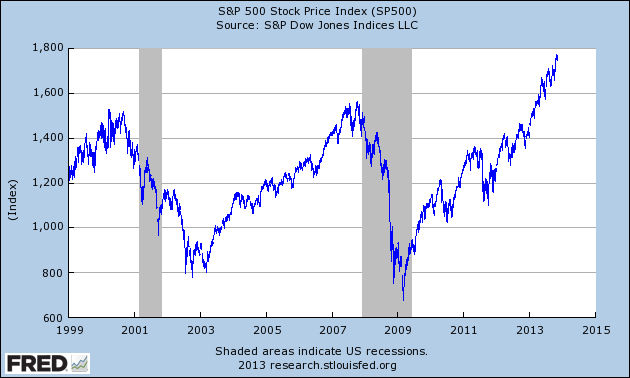 From a longer term perspective, ten year annualized rates of return have recovered off their bear market lows and back towards the long term average of roughly 10% annually.  This data would suggest that further gains are certainly possible. 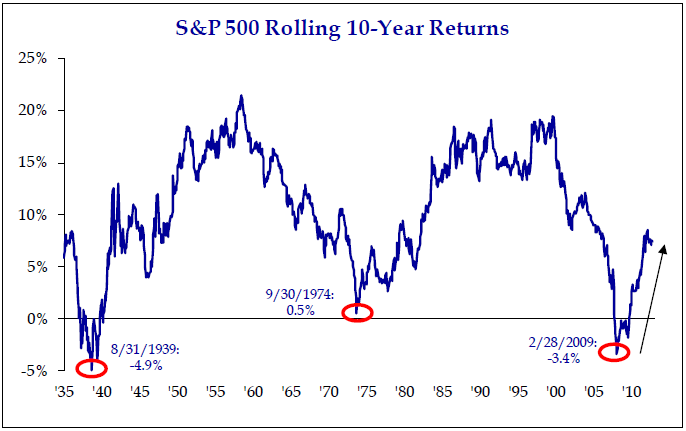 In general, we remain bullish on the long term outlook for equities and are also constructive on the coming year.  As we discussed in our August update, if we could take a peek at one indicator for how stocks might do in the coming decade, it would be an answer to how commodities would likely perform.  With China slowing to a more moderate pace, a greater focus on its consumer sector, massive new supplies of domestic energy, a lax labor market, and a dramatic increase in productivity associated with technology, we just don’t see pressures in either the commodity or labor markets for quite some time.  As Francois Trahan of Cornerstone Macro points out, lower inflation and lower interest rates are a boon for consumer disposable income, which in turn makes up nearly 72% of U.S. GDP.

In addition to the economic fundamentals, there are also technical reasons to be bullish about stocks.  We typically discuss our investment philosophy in the context of three cycles, the Economic Cycle, the Innovation Cycle and the Credit Cycle.  We won’t go into details on each of these here, but we typically look to the Credit Cycle to get a sense for what asset classes might be benefiting from unusual fund flows aka “fund flows gone wild.”  Clearly, the last few years have not felt giddy to most investors, in spite of the stock market hitting new highs.  If any market has been hot within our Credit Cycle framework, it would probably be the bond market, stoked by real demand for conservative investments and others front running easy Fed policy.  The graph shows that after peaking in 2007, equity fund flows have nearly dried up at the expense of bond fund flows gone wild. 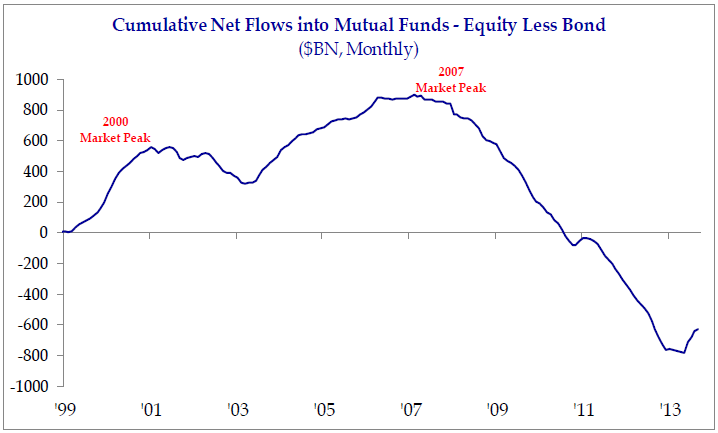 Strategists have been talking about a great rotation from bonds to stocks for the last three years, but as a general rule, it hasn’t yet happened nearly to the degree most have feared – at least not yet.   Jason Trennert, an investment strategist and friend from Strategas Research Partners, made the observation a year or two ago that a full blown rotation might not occur until some folks started to feel actual pain.  While everyone knows that interest rates are unsustainably low, many may not actually sell their bonds until they become too painful to hold.  The Fed’s taper talk, unleashed in May, may have ushered in just such a period.  As the chart below shows, yields on 10-Year Treasuries made an aggressive upward move starting last June when talk of tapering entered the landscape. 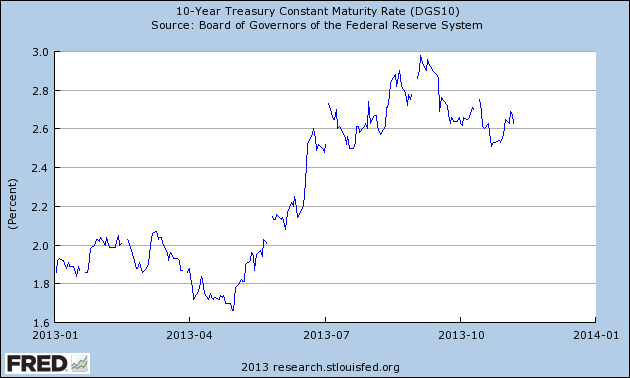 The pain of an actual backup in interest rates may have been the catalyst for causing money to move out of bonds and into stocks, or at the very least, money market funds.  As the next graph shows, the reaction to potential Fed tapering on fund flows appears almost immediate.  As soon as the average 10 year yield started to increase, the amount of money flowing into equities relative to bonds began to spike.  Similarly, as September came and the Fed surprised everyone by saying it would not taper in September, the shift of funds between equities and bonds began to subside.  Jason Trennert may be right; the pain of rising interest rates could be an important catalyst for the Great Rotation back to stocks. 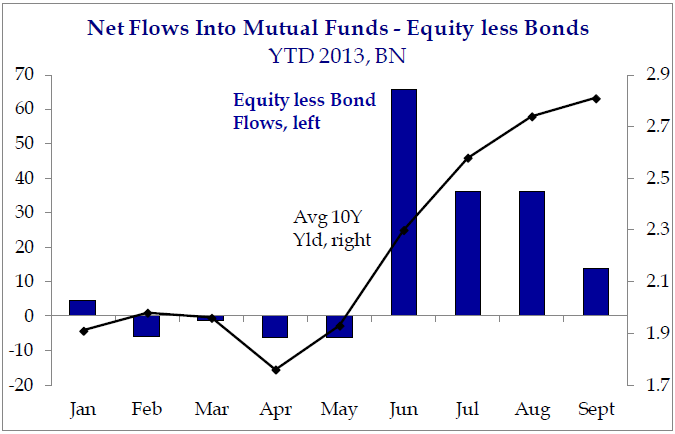 We believe that we could be at the cusp of a major change in investment sentiment.  No one knows the exact timing of such a move, but the Fed will eventually taper their bond buying.  Some are now speculating, given the solid payroll numbers, that it could be in December rather than March.  While tapering isn’t tightening and the Fed will still be playing catcher to keep the back up in yields from getting out of control, a more normal, market-driven interest rate environment should lead to a more constructive period for the stock market, and in particular, individual stock performance.  The May taper talk clearly showed this to be a likelihood, with the market enjoying solid results, beyond pure bond substitute dividend plays.

We strongly believe that the economy is capable of growing of its own accord at this stage of the game.  While we are thankful for Bernanke’s efforts during a difficult time, we now believe continued stimulus could be more harmful to further growth than helpful.  The Fed’s efforts, while important for a time, have engendered a risk on/risk off mentality among investors, one which has been too easily accommodated by the availability of index based exchange traded funds.  In this more passive and tactical approach to the equity markets, individual stock correlations have soared, meaning that the good, the bad, and the ugly have generally been less distinguishable.

According to our own calculations, there has been a statistically significant negative correlation between the Broadleaf Growth Equity portfolio and the overall correlation among stock prices.  In fact, nearly 80% of our returns can be explained by falling correlations between all stocks as a whole.  As correlations have fallen, individual stock excellence has a greater opportunity to shine. 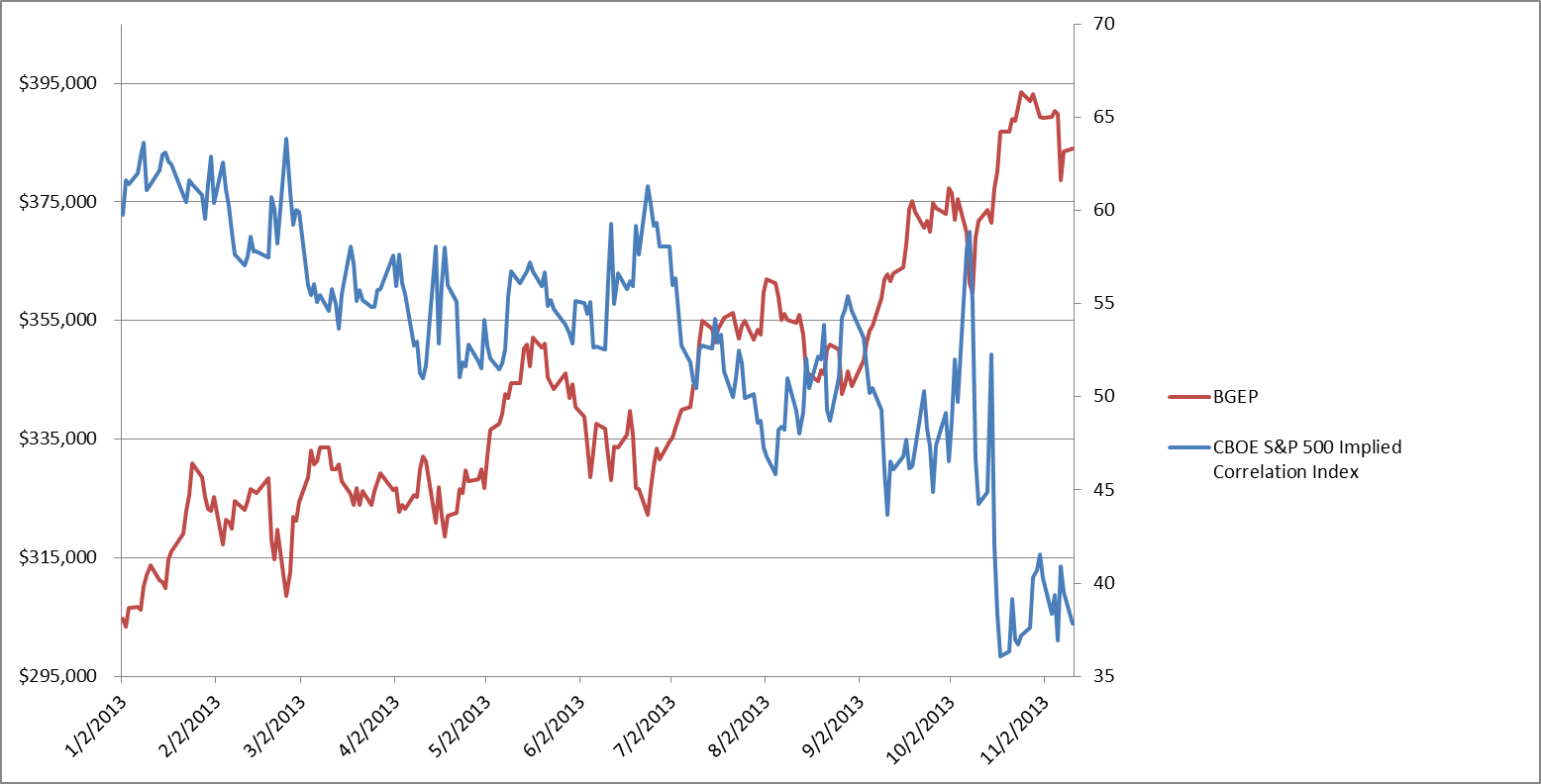 As taper talk increased over the summer months, large investors may have begun to rethink their strategy of risk-on/risk-off investing by rewarding individual stocks on the merit of their own fundamentals rather than a general market call.  As talk of postponement picked back up in September, correlations rose once again and as talk of a December or March taper surfaced, they fell.

Save for the Twitter’s and Facebook’s of the world, the economy might not be growing as fast as everyone would like it to be, but we are increasingly convinced that continued actions by the Fed may hinder faster growth at this stage of the game.  Only when companies see opportunities for investment that look more promising than their own stock buybacks, dividend increases or government bonds, will they really start to hire new people.

So, should you buy into this market today?  If you can make a ten year commitment with the relevant funds, absolutely.  Do I think the market will do well in 2014?  Probably, but only to the extent that the Fed fades into the background and the private sector is permitted to take control.

Of course, you could say that about a lot of things.