Many Shades of Grey

We’re getting towards the end of earnings season, which provides a little breathing room to make a few comments on the overall market.  The action has been choppy since the beginning of April, with a host of “firsts” leaving the typical investor more confused about the next move than necessarily concerned.  As we mentioned in Barron’s Big Money Poll last week, investors just seem far more tentative than they were at this time last year.

The NASDAQ composite index retook the 5000 level a few weeks ago, something it hadn’t done since the dot com bubble burst fifteen years ago, but has failed to make a more convincing breakout to new hallowed ground.  The S&P 500, while thirty percent above its former 2007 level highs, is encountering stiff resistance at the 2100 level, new highs on an inflation adjusted basis.

Central banks seem to be in one of two camps around the world.  They have either initiated Quantitative Easing following the success of the United States’ program, or they may likely soon do so.  Japan is well down the path, Europe has just started with a vengeance, and China, whose growth is likely far below the official published estimates, may soon be toying with the idea.  The investing adage “Don’t Fight the Fed” has taken up residence in Europe and China where the markets, to our surprise, are among the best performing this year.

As a consequence of the love affair with buying bonds, yields on an offering in Europe actually went negative for a period of time.  Investors, in essence, were willing to pay interest to someone else for a reasonable assurance that they would one day get their principal back.  Relative to money market funds with zero rates of interest, this takes the world of finance to a whole new level of firsts.

Oil prices, after plunging sixty percent in the past year, have bounced back by thirty percent to $60 a barrel.  The dollar hit new all time highs against almost every other currency around the globe, but in sync with oil, has now pulled back as global investors reconsider the relative growth considerations.

We continue to believe that growth in the U.S. is better than the recent published numbers suggest, and is likely to rebound after unusually poor winter weather, West coast port disturbances, and the aftershock of the massive decline in oil prices.  While falling oil has hurt some areas of the country and sectors of the economy more than others, the lower prices should eventually prove to be a net overall benefit.  Comments from the likes of Visa and MasterCard this quarter suggest that consumers aren’t spending the savings as they used to do, but at least for now, appear to be paying down debt and holding it for a rainy day.

Employment is improving and earnings, at least from the companies we track, remain solid excluding the unusual effects of foreign exchange associated with the rising dollar.    Innovation remains alive and well in both the technology and biotech sectors, and M&A activity is on the rise.  U.S. companies remain vigilant about their capital return policies, with dividend increases and stock buybacks a common discussion item on almost every earnings call.

We believe the Fed will raise interest rates in 2015, but we’re not as convinced that they will do so aggressively, as might be the case if they were worried about runaway inflation and an overheating economy.  Any rate increases, at this point, should be more about policy normalization after nearly a half decade of easy money policies.  While the policy change for rates may not bring about the bond market rout everyone has been expecting for the past few years, it should curtail the love affair for bonds relative to stocks.  According to Evercore ISI, fund flows into bond funds have totaled $61 billion this year, while fund outflows from equity funds have totaled $48 billion!

In spite of first quarter GDP levels that have flirted with negative, recession level territory two years in a row, we’re not concerned that we are in one or will soon be.   If for no other reason, it doesn’t even feel like we’ve experienced a full economic cycle, which historically has included a far more significant period of economic expansion marked by a more robust housing market and M&A cycle.   Is this a bad thing?  Not necessarily, as slow and steady and a healthier, more prudent consumer might represent a better more durable long term path for the economy and the stock market.

In spite of the overall level of confusion in the marketplace, we do have one high conviction level view, and that surrounds oil prices.  While oil has bounced back from $40 to $60 in recent weeks, we would fade the trade as we consider it to be a bull market rally in a bear market trend.  We just don’t view the improvement in oil prices off their low as a sign we’re back to the races, but a natural bounce that almost always accompanies any asset class that has recently been decimated.

We are well aware of the massive cutbacks American drillers have made in their rig counts.  But at the same time, almost every energy company we follow talked about rising production levels not only this quarter but also through year end in spite of the massive cuts to CAPEX.  This suggests productivity in the oil patch has taken a permanent step up.

To this point, the graph below, courtesy of Strategas Research Partners, caught our eye this morning.  While rig counts have declined rapidly from their highs (blue line), they also hit levels far above anything ever seen in the United States in the past thirty years!  If rig counts were in a bubble, shouldn’t we expect oil supplies to remain elevated as well for quite some time?  Even at the current level of rigs in the market, production levels should remain elevated if 1987 production is any indication.  Given the advances in well productivity brought about in the past few years, it is no wonder that most companies see increasing production in the coming year in spite of the massive cuts to capital spending to date. 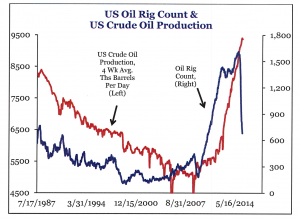 It is difficult to have a great deal of conviction in this past month of “firsts” for the market, but experience tells us, quite clearly, that the bounce in oil prices is likely unsustainable.  Real life experience suggests that any 50-60% decline in price across an asset class – whether in tech, homes, or oil – often takes years rather than months of adjustment to find a new equilibrium, even when the private sector rapidly adjusts its expense structure.  Similar to the bounce in oil prices, the recent decline in the dollar may prove transitory.

We remain constructive on the U.S. economy and its relative positioning within the world even amidst the many shades of grey.