The results of last night’s election are no doubt worthy of an Economic Update.

As I shared my initial thoughts with others on Facebook last night – the possible reason behind the Trump surprise and the likely impact on the financial markets today – I found it far easier to re-post what I had written about #Brexit in an Economic Update last June.

The parallels between that vote in Great Britain and yesterday’s vote in the United States are uncanny.  And I believe the outcome this time around will be quite similar.  After an initial swoon, all markets, including Great Britain’s, are considerably higher. To view a printable version of this Economic Update click here: brexit-is-beautiful-act-2

Rather than rewriting what was already a somewhat prophetic piece, I thought I’d share it again exactly as written and let you judge the parallelism between the events.  Just substitute Trump for Brexit and perhaps the Indians in the World Series for the CAVS in the NBA playoffs.  (Sure, the Tribe didn’t win, but I heard the Cubs did have a nice little parade in downtown ChicagoJ)

While no situations perfectly rhyme, I think any initial pain in the financial markets will quickly be forgotten, just as it was with Brexit.   The people selling are largely position traders, holding around the outcome of a binary event like yesterday’s election rather than investors hoping for a stream of earnings over many years.

Donald Trump was gracious and humble with his victory speech suggesting – let’s hope – that he will govern in a far less combative fashion than he and Hillary both campaigned.  While slower for longer remains our core belief, there is no doubt that corporate tax reform, changes to the Affordable Care Act, and fiscal stimulus are now far more likely given the retention of the majority in Congress.

While many of the Trump administrations policy issues remain unknown and a work in progress, at the margin the news is undoubtedly positive for the politically despised health care sector as well as industrial names potentially levered to a pick up in fiscal spending –especially defense.

Brexit is not the end of the world, but the beginning of a new future.  The financial markets will get rocked in the short run, but the excitement I feel for a country making an active decision to endure the well advertised short term pain for what it believes to be a superior long term path is completely and utterly refreshing in a global environment so devoid of it.

A Facebook friend said it best earlier this week when he commented that a decision to “Brexit” would be similar to leaving a “high-paying but crappy job to start his own business.”  A bear caged for life at a zoo may always be safe and well fed, but will also miss out on the more dangerous yet exciting wilderness it was ultimately designed for.  Some Britons obviously feel the same way.

“Brexit is more important than you know,” I wrote on Facebook last night, while following all the trending tweets at a pace I’ve never quite used on Twitter before.   History has shown that the political trends found in one country can quickly become global in nature, as our own successful fight for freedom in the late 1700’s showed, giving birth to similar revolutions in Europe shortly thereafter.

Normally, I never invest on the basis of geopolitical fears and risks as they are often so binary in nature and fleeting in duration.  The outcomes are also unpredictable.   But the vote to #brexit, I believe, could very well represent a soon to be global trend, one in which a silent majority seeks to take its culture back, not out of a sense of nationalism or xenophobia as a liberal media so easily labels it, but simply out of a resentment that a globally united community claims to have all the right answers.

In the polling leading up to #brexit, the elderly were far more in favor of leaving the EU than the more youthful of Great Britain.  I found this age based dichotomy interesting, recalling how prior generations and cultures had been taught to revere their elderly, not out of compelled obedience, but out of simple respect for the wisdom their lives had no doubt afforded them.  Why not ask the elderly why they think Brexit is a good idea? And more importantly, listen?  Wisdom and knowledge are two different things to be sure, but wisdom also suggests that history tends to repeat itself. 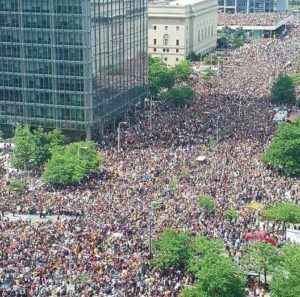 Earlier this week, Cleveland came together as a community to celebrate the Cavaliers and our first national sports title in 52 years.  Nearly 1.3 million spectators made the pilgrimage downtown in spite of the traffic jams, noisy crowds, and potential for bad actors.  I was so proud of how Cleveland showed a love for good old fashioned values at Wednesday’s parade, coming together out of a common love for sports, community and family in a peaceful and friendly fashion.

“We are a good Tribe, Northeast Ohio,” I wrote on Facebook the night following the event.  Why I chose to use that word I’m not entirely sure, but like the vote on #brexit, perhaps in the rise to globalize, we forget a need to respect one another’s differences, one another’s tribe.  Tribes are still relevant as an embodiment of local culture, even though some might view the term as outdated and perhaps even prehistoric.  Maybe that’s why I used the word.

At the same time, running a country isn’t like a game seven of the NBA finals where the Cavs won the game by 4, but more like the last few seconds of the game where it could have gone either way.   Compromise, not winning, is the ultimate game of politics, but in recent years it has been absent on both sides of the aisle.  The game never ends when it comes to running countries, but is fluid and continues without a time clock.  Political leaders need to remember that they aren’t managing to the outcome of a score, but a playing field that will keep people peaceful, productive and not feeling like they are being taken at the end of every match.

So, how does this change the financial landscape?  At this point, I would classify the decision to #brexit and the similar global political trends that may follow it, as another reminder that investors should make sure they have a long term time horizon for assets invested in long duration vehicles like common stocks.  Get your ducks in a row.  Know what liabilities and obligations you might have coming due in the next few years.  Call your financial advisor for a review and stress test your tolerance for risk once again.

While I think a recession is less likely than what I feared with oil’s decline in February and the flaring of spreads on European bank credit default swaps that followed it, prudence should still be the name of the game.  I’m not quite sure why the cost of insuring European bank debt spiked so much in February, but I can’t help but believe that the same unknown variables just disappeared over four short months.   Watching what oil and the dollar do, perhaps, will be key to determining whether or not any recessionary inducing contagion from #brexit could follow.
The market’s recovery from the February lows has largely been driven by its more cyclical sectors, as investors have begun to anticipate improvements in leading economic indicators associated with global monetary easing efforts and the improved price of oil.  While the debate remains as to whether or not these sectors will actually see a lift in earnings results in the coming quarters, I just don’t see one, if it does occur, as all that sustainable.  Japan had several cyclically induced spikes in its stock market in the last thirty years, but over the last thirty years, has made no positive progress.

For those who have a long term time horizon, I think #Brexit is downright beautiful.  It increases the diversity of viewpoints within local structures rather than unifying them under an increasingly global point of view.  Brexit represents a vote for individual freedoms – a vote to succeed or fail to be sure – but the chance to try.

Our portfolio remains focused on those companies that can grow their revenues and earnings regardless of the economic environment, and while these areas will encounter periods of volatility from time to time, their stock prices will eventually reflect the upward trajectory of earnings.  Innovators are a big focus of ours, and the decision to #brexit, and others potentially like it, support the importance of quiet revolutions in making the old ways of doing things new again.

Be prudent, but keep the faith.  Brexit is beautiful.

I can honestly say I feel far more optimistic about our economy and its possibilities than I have for over a year.   And while I recognize some may feel the polar opposite, as an investor with significant experience in the trenches and on the front line, it’s where I stand.